Hello! It’s been a while but we’re back!

Now this update is going to be a wordy one, but we hope you all find the information useful.

Last night (28th February 2018) two members of your committee braved the treacherous weather to attend West Ham’s Supporters’ Advisory Board. A lot was discussed and four pages of notes are summarised below.

It was an interesting set up and a good opportunity to hear the views of other fan representatives and groups, as well as a chance to speak with the people behind the scenes at the club.

We also have some information around our Quiz on the 22nd March (our second this year).

Shelving
Apparently this is something people have had complaints about. There hasn’t been enough shelving in the stands for people to put drinks on etc. The club has had additional shelving in the North, South and West Stands and the East will soon be complete too. The club have spent over £40,000.00 to implement this.

Memorabilia
The club are looking into ideas around how to showcase club memorabilia. They are keen to do something meaningful with the 1000+ items, which includes the World Cup medals amongst other historic football souvenirs. £60,000.00 a year is spent by the club to house them privately at local antiques dealer Christies and historically the club museum housed them, but this was rarely visited and they are looking at more practical ways to display them. One possibility is in the stadium for tours and currently the world cup medals are able to be viewed in the club shop, but the club are looking for more ideas.

Champions Place
The second phase was completed in October with 1,200 new stones laid. Phase 3 will start soon – dates to be confirmed.
The club are looking into the cleaning of existing stones due to complaints. They are already jet-washed before every game, however it seems that dirt is getting stuck in the writing leaving some to believe the writing is fading. The club have given assurances that the stones wording is not damaged and are looking into longterm maintenance options to keep the stones looking their best.

Diversity & Inclusion
The club have applied to the FA to move up a level in the D&I rankings based – in part, on the work they have done with groups such as ours, the disabled supporters and other initiatives.
The Everton game has been earmarked for West Ham to show support for the Kick It Out campaign.
Their aim is to achieve a gold level equality standard.

West Ham are working in partnership with the Disables Supporters Advisory Board (DSAB) on the following:

The club have also produced a video showcasing all of their Equality initiatives which we will share once it’s made available online.

Help Centre
West Ham will soon be launching a Help Centre site which is designed to help fans with general and match day issues from directions to ticketing to other FAQs. We’ll share more once the launch date has been announced.

Political Rumblings
There’s too much to go into detail on, but two things to mention:There was a lot of noise in the media when Sadiq Khan stepped in and got involved regarding the stadium. However he has not responded to any of Karren Brady’s 15 letters and she is unable to get a meeting with him. Until that happens, it’s hard to know what his position is or what the knock on effects might be for the club.
The stadium operator won’t agree the capacity increase to 66,000 for whatever reason and so there will be a court case in October/November this year.

Branding
A lot has been said about making the stadium more “West Ham” so it feels like home. Some rebranding has already taken place, adding some Bobby Moore imagery to the outside of the stadium. The club are arranging a focus group with the SAB to discuss what the fans want to see in the stands and concourses. Themes and ideas should be led by the fans and then implemented by the club. Please get in contact with any ideas you may have and POI will do our best to represent those ideas in that forum on your behalf.
Applications have been made to rename one of the roads leading to the stadium “West Ham Way” and the club are awaiting approval. They are also seeing if it’s possible to get permits for the old Green Street stallholders to pitch there on match days.

World Cup Statue
The club are trying to move the statue to Stratford and have paid for a plinth that is in place, ready for the statue’s arrival. They have agreement in principal with the council, however this needs to be ratified by a council vote which will take place on 22nd March. West Ham will be paying for the relocation of the statue.

Upton Park Memorial Garden
There has been significant complaint and upset around the condition and maintenance of the memorial garden since the Club moved to the new ground. When the ground was sold, it was sold with the condition that the memorial garden was maintained (first by Galliard and subsequently by Barratt). Apparently there is a team employed by Barratt who are responsible for the upkeep, but it has been recognised that they have fallen short of the standard West Ham fans expect. The club have reviewed the situation and agree it is not up to standard. West Ham have now intervened and will be sending their own people to the Memorial Garden once a week for general maintenance, landscaping etc. There is no agreement around the ongoing maintenance post-development when the properties are sold on, however the club will be discussing this with the families who’s love ones are memorialised there as West Ham feels it is they who are most affected and deserve to be consulted.

Tickets
Ticket prices are frozen for all season tickets except Band 5 which will go up by £31 if renewing for one year. Those Band 5 ticket-holder renewing for 2 years will still only pay £289 per year.

The club trialled an initiative for away tickets recently, making 10% of away tickets available to people who don’t have the minimum points required. This was off the back of SAB feedback that it is notoriously difficult to get away tickets and essentially the same people are buying tickets over and over and in some cases not attending matches because they just want the point or, selling them on for a profit. WHUISA have run a survey to get feedback on the scheme which will be made available on their website at some point on 1st March.
Feedback was offered by some that there have been complaints on the forums by some (presumably those who are used to getting away tickets every time), however it was accepted that something has to be done otherwise many fans (including younger ones) will essentially be locked out of away games.

Stewarding
Much has already been said about this on other forums and sites, so I’ll keep it brief. The stewarding is now provided by four companies instead of one. There has been call from the fans to reinstate stewards from Upton Park who have all been contacted with the club offering to pay for their NVQs. One of the four companies has 70 former Upton Park stewards on it’s books. The others have been asked to do an audit. The aim is to have a former Upton Park steward as a “Quadrant Manager” in each stand.

And that’s about it I think. It was a long old meting so I may have missed some bits, but hopefully that’s most of it covered. If you’re interested, keep your eyes peeled online as there was plenty of representation at the meeting.

Just when you got over our first Quiz, here’s another! And if you came to the last one and thought it went on a little late, don’t fear! Our professional Quizmaster David H is back! So Jim can relax this time round and enjoy his rum and diet coke in the corner.
Details are: 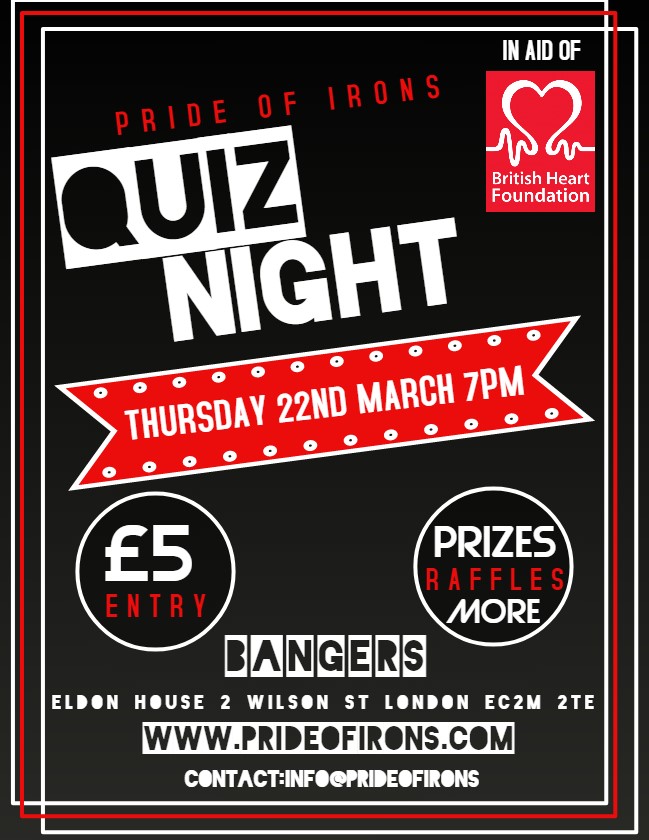