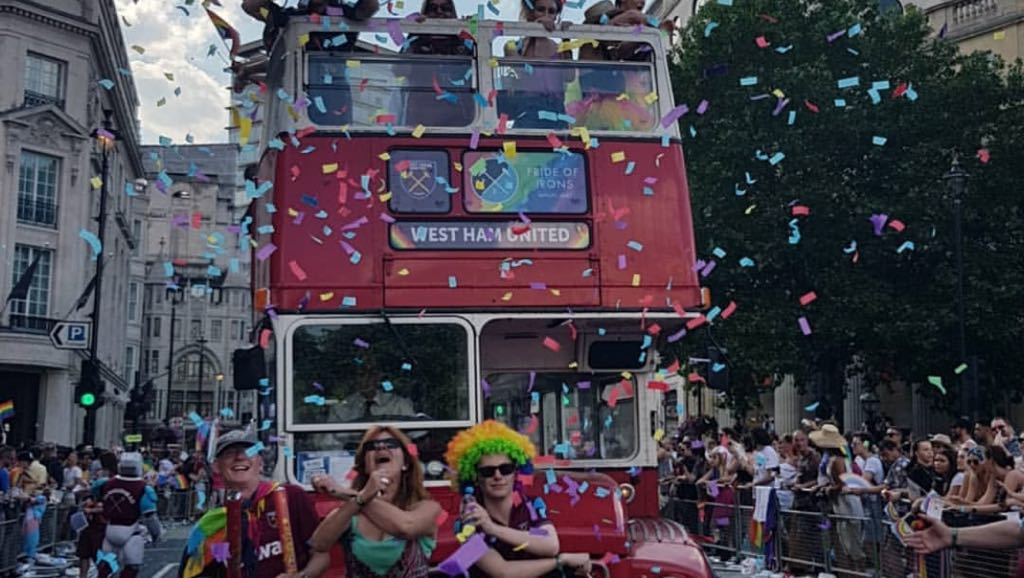 We will no doubt follow this up with multiple blog posts from those who attended, but for now a quick thank you for all involved.

In the summer of 2015, Pride Of Irons attended our first ever Pride In London. To my recollection, there were seven of us. A year later and we had around fifteen. Last year we had 25 and our club mascot, Hammerhead. The first football mascot to attend Pride I hasten to add. This year? Sixty!

Now it’s true we had wristbands for 90, but given England were playing in a World Cup semifinal, a two-thirds attendance is mightily impressive. Add to that Hammerhead and a ruddy open top, West Ham-branded route master bus and the progress is hard to comprehend.

A few times yesterday I climbed the stairs to the top deck to see the mass of West Ham shirts, the smiles and the rainbow and glitter-painted faces and it brought a lump to my throat.

Thank you, each and every one of you, for giving up your time to come and show your colours and your pride.

Our final shout out goes to Kenzie – the young man who captured the hearts of everyone who saw him – and his two proud Dads Ian and Andy who encourage the little guy to be himself. Kenzie is the little boy so many of us wish we could have been.

A final request please, if you took any pictures of yesterday’s events, we’d really appreciate copies. You can share them with us by emailing them to info@prideofirons.com or tweet us @prideofirons.

Thanks once again and we hope to see you soon.