Did you know that according to Office National Statistics bisexual people feel less happy and are more anxious than other sexualities?

Did you also know that according to the same survey bisexual people have a lower amount of overall life satisfaction and feel less worthwhile that straight, gay or lesbian people?

Did you know bisexual people routinely have their identity, and by extension their very self-worth, questioned on a daily basis?

Did you also know that today is bi visibility day? I didn’t! Woops what a terrible bisexual I am.

Let me put a disclaimer in here though – I’m lucky as I don’t suffer from anxiety, and I am an all-round happy person. Everything makes me happy; a good biscuit, Harry Styles’ existence, West Ham WINNING A GAME. I also am lucky that I have an incredible family and a loving circle of friends who I am comfortable enough with to be out and who all recognise my sexuality. But it hasn’t always been easy, and it isn’t always going to be easy. Boy, I just wish it was easy.

For this blog and in honour of bisexual visibility day, I thought I’d sit down and chat with my fellow committee member Carol, who is also bisexual, to highlight the reality of attitudes and experiences we face regularly. 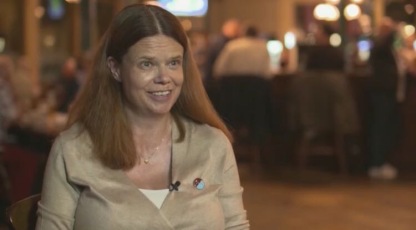 Carol on Sky for Pride of Irons last year

Lorna: Hi Carol! I thought a good start would be for us to talk about the reality of dating as someone who is bi. Have you found it challenging?

I don’t use apps or online as I find it soul destroying for all kinds of reasons but mainly the poor behaviour of people. But when I did I noticed those kind of comments.

I think it plays into this idea that bisexual people ‘can’t be trusted’ and that we’ll never be monogamous which is really unfair.

Absolutely. A gay colleague of mine once said to myself and another bisexual friend “I would never date someone bisexual you can’t trust them, they would cheat on you”

The gay guy was basically saying because we can sleep with everyone we will! That bisexual people are kind of insatiable and fundamentally untrustworthy.

There’s a quote from one of Joe Lycett’s stand ups where he says being bisexual has nothing to do with the frequency of having sex, it’s just who you’re attracted to, which is exactly it! 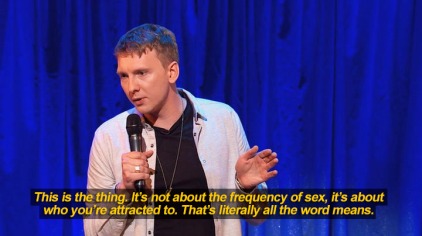 Joe Lycett being the bisexual icon we all love and deserve

That’s it exactly. It’s one of those annoying myths.

It’s a really damaging myth as it makes you question your self-worth. I think another one of those annoying myths is one that our friend Jim pointed out yesterday that being bisexual is just a phase before coming out as gay. It also ties into the myth that bisexuality isn’t real

Yes absolutely! It’s so frustrating. I’ve just started dating a guy, but I’m still bisexual. Just as last year when I was dating a girl, I was still bisexual. I’m not straight or gay depending on who I’m dating, yet I know society will just make an assumption based on whose hand I am holding down the street.

Indeed. You know your sexuality, but your identity is disappeared by the choice of partner. I feel when I am dating a guy uncomfortable about going to LGBT events.

I know what you mean, it’s almost like you’re made to feel like you shouldn’t be allowed to be at Pride or in LGBT spaces if you’re a bi person dating someone of the opposite gender, because you’re faking it or something.

Or like other people will assume you are a straight person “invading” an LGBT space.

When I was younger I used to always feel the need to defend my queerness and I remember finding myself in gay clubs literally recounting tales of girls I’d hooked up with just to almost prove that I was allowed to belong there. “Look I am queer too, promise!”

You just should never have to do that.

I try not to anymore. Although the reality is I’ve actually found myself feeling the need to defend my sexuality more in LGBT spaces that with my straight friends

Which is weird and not the way it should be

Yeah. I remember being on a night out once in a lesbian bar in Soho and a friend of a friend said to my face “you’re not really queer are you” It was so hurtful and I felt like such a fraud. No one ever should feel the need to defend their sexuality. No one makes a straight person prove their straightness. A bisexual person doesn’t have to have slept with someone of the same gender to prove their worth of being in a gay space.

Have you ever told a straight man you’re bisexual and had that kind of ‘two girls is so hot’ reaction?

God no, thankfully! But I can imagine it happening

When I told another bisexual friend about this blog, she said a common question she gets asked is “so who do you prefer?” or “do you think you’ll end up with a boy or a girl?” which is a question I get asked ALL THE TIME.

Yes have had that question a lot. My view is that it is about the person and my attraction to them, not the gender.

Yeah exactly, which is why I find that question quite exhausting as I feel I’m constantly explaining my sexuality to people who I came out to years ago

It is tiresome! As I’m sure you’re all now finding this blog, I hope not though, as actually my conversation with Carol was really comforting to me as it is always so reassuring to know other people understand you. Which is why bi visibility day is important. Which is why representation matters. We’re all happier when we know we’re not alone.

When I was doing my hasty, last minute research for this blog, I googled “what’s it like to be bisexual” and I found this article. It’s a great read, and I would recommend you all give it a whirl, especially as it’s written by a bisexual man giving a different perspective and reality to one Carol and I provided above. Anyway, it ends on a quote I am going to shamelessly steal and end my blog post on too. As it really sums up the day to day reality of being bisexual:

“After a lifetime of feeling like I needed to explain myself, for once, I wanted to just not talk about it. I wanted the freedom to be me and the freedom not to have to remind people I exist. It’s all any of us ever asked for in the first place.”

View all posts by lornasevern