Alastair comes from a small market town in Hertfordshire, full of Spurs and Arsenal supporters. As a child he chose to follow West Ham as he liked the colours of the kit and for a brief period while he was growing up in the 1970s they were rather good. Fast forward to the late 1980s, and after studying at university in London he bought his first home in Canning Town, primarily because it was cheap, but also lose to Upton Park. But more than 30 years later, he’s still in East London and gone upmarket(-ish) to Bow, just a ten-minute walk from the London Stadium. His fondest memories of watching West Ham are the Intertoto Cup final in Metz in 1999 and Stephen Bywater’s infamous West Ham debut in the surreal 5-4 victory over Bradford City.

Away from West Ham, Alastair has worked in retail banking since the 1980s and is a Freeman of the City of London and Fellow of the Royal Statistical Society. 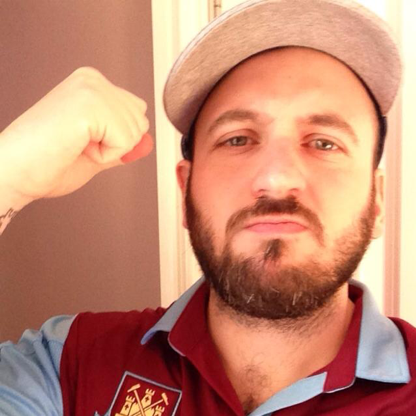 Raised by a family of Tottenham supporters, Jim didn’t really like football as a kid – and who can blame him. The one Spurs game he attended they were ripped apart by Southampton losing 3-1 with Tottenham’s only goal being scored after he had left the ground. Little did he know the footballing Gods were smiling down on his that day. In his early 20’s he was begrudgingly dragged over the park in Beckton with his mates to play football and somehow the game started to take hold. Even after temporarily going blind in one eye after taking a full on strike to the face – clearly he was a natural defender. Jim started attending West Ham games with friends and has been a season ticker holder since. In 2014 he launched a West Ham LGBT Supporters’ Twitter account which on 28th February 2015 officially became Pride Of Irons. Today he is the current chairman and – not at all coincidentally – West Ham are having their greatest season yet. COYI!

Lorna spent her childhood following West Ham’s progression up and down the league via teletext after her Dad gave her a West Ham hat one winter. Amoment of pride was the season she completed the West Ham page of her panini sticker album, but her enthusiasm in football soon dwindled through her teens and early twenties. About 5 years ago through the insistence of a friend she picked up her interest and has been following the team with renewed passion, attending matches when she can. She saw Jim’s call out for other LGBT West Ham fans on twitter and was proud to support the launch of Pride of Irons as a committee member. COYI!

Scottish Born but Londoner by choice; football was in the blood as his dad was heavily involved in amateur and youth football. He followed the ups but mostly the downs of Aberdeen Football Club all his life. Dave’s claim to fame is that he was administrator of boys club that won the Scottish youth cup 4 years in a row in the 90s. Having lived in East London for five years he decided to follow the local team he was been bitten by the hammers bug and is now a season ticket holder and avid fan.
Best moment in football – Aberdeen winning the European cup winners’ cup under Fergie. 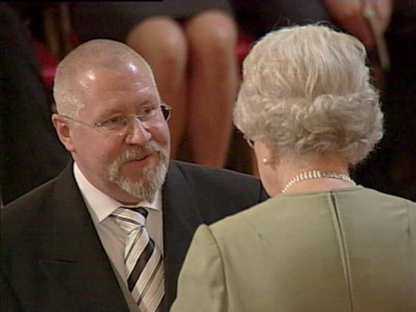 Trevor is an Artist who mainly paints nude men, sometimes Landscape but he prefers looking at men rather than trees! He saw his first West Ham when he was eight years old when he was taken by a family, much to the disgust of his family who were committed Arsenal and Orient fans he has followed the ups and downs of the clubs fortunes for 52 years! Trevor worked with Children and Adults with Disabilities and later Mental Health issues as a result he got involved with Disability Sport and Chaired the London Sports Forum for Disabled People for 16 years (he was awarded an MBE in 2003). Trevor has sat on various committees including The FA’s Tackling Homophobia Working Group and Sport England’s Equality Committee. He is currently a Trustee of Wise Thoughts, the LGBT Arts charity and his role on the Pride of irons Committee is to liaise and maintain contact with other Groups and organisations, sporting and otherwise on behalf of POI.

Stratford born, Lifelong happy hammer. One of the unfortunate people to have Spurs fans in the family. Thankfully my father stayed true to the Claret & Blue.

I’m a season Ticket Holder for both the Men’s and Women’s Teams. You’ll find me at Rush Green and the London Stadium. I also travel to a majority of the women’s away matches. You can also catch me playing the odd gig in and around London.

Reason for becoming a Pride of Irons committee member: POI is making a difference. I believe we should all try to  “Make a difference, not just a living.” I want to help out as much as I possibly can, ensuring there’s plenty of laughs along the way. 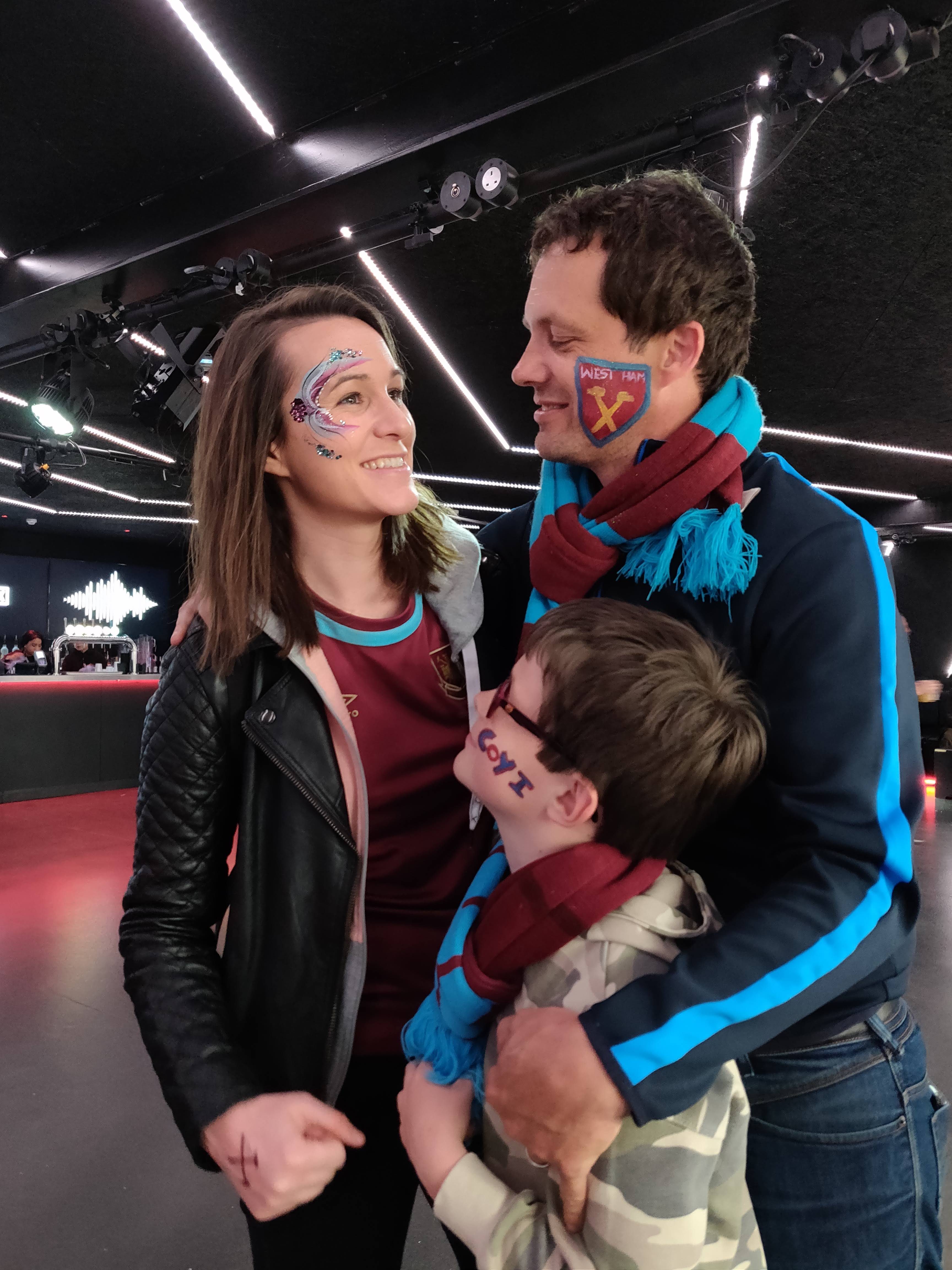 I started supporting West Ham through my brother Eoin. That’s him in the picture with my nephew Eddie (a future West Ham captain) at the women’s FA Cup final in 2019. Eoin moved to London when I was 12 and started working in Dagenham, where his colleagues got him hooked on West Ham. That spread all the way back to his family in the West of Ireland, and now here I am, living in East London with a season ticket for both the men’s and women’s team!

I try to get to as many games as possible, while also playing a bit myself (@mundialmag women’s team). It doesn’t leave much time for anything else, but who needs other interests when you’ve got football, eh?! I love meeting up with Pride of Irons members before and after games. I always feel great going home after catching up with the gang, even if the result doesn’t go our way.

Born and raised in Calgary, Alberta, Canada with strong connections to Gravesend, Kent. I am a proud Canadian West Ham supporter and have been since the mid 90’s when I was given a shirt from a friend in Gravesend. I have been lucky enough to attend many games at the Boleyn and at London Stadium. The most memorable was the playoff semi final win against Cardiff in 2012, which ultimately led to promotion back to the Premier League. I also attended my first West Ham Women’s match in Feb 2020 where we beat Liverpool and was immediately attracted to the game, and the atmosphere, and became a passionate supporter of the team.

In the POI I have found a community where I can share my love of football with amazing people who have quickly become more like family to me. The distance we are separated by is brought closer with social media, WhatsApp chats and video catchups weekly. I am so proud of our clubs support of diversity and inclusion, and the POI’s commitment to supporting LGBTQ fans, families and allies that I really wanted to be able to give back. I am honoured to be a committee member and be able to contribute to the POI while enjoying supporting our club.