Well what a week that was!

There were TV appearances, the London Stadium lit up with a giant rainbow and the Pride Of Irons logo, pitch-side interviews, a film shown inside the stadium, a mention in the programme and more besides. What a proud moment for West Ham’s LGBT fans!

We had been looking forward to this for weeks. Friday the 24th – the day of Moyes’ first home game against Leicester and the launch of the Rainbow Laces campaign. There was plenty planned for the day but what a surprise to wake up and find Co-Chair Jim’s fan film for Carling’s In Off The Bar had been Tweeted out by Sky Sports to their 4.62 MILLION followers! Later in the day it was added to Facebook and YouTube and received an overwhelmingly positive response! Sure there were homophobes who decided to air their views, but it only goes to show how important campaigns like Rainbow Laces and groups like ours are! 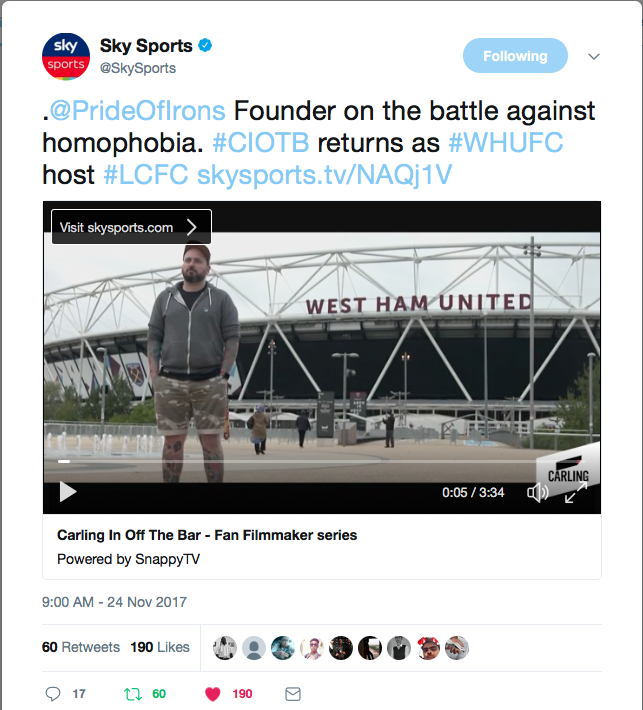 Throughout the day – and indeed the course of that weekend – the campaign was featured heavily in the media. We’ve known for some time that West Ham United are behind us, but the prominence of the club in the media was something to behold. Seeing our club captain, Mark Noble, representing a colour of the rainbow flag is something we only could have imagined previously. 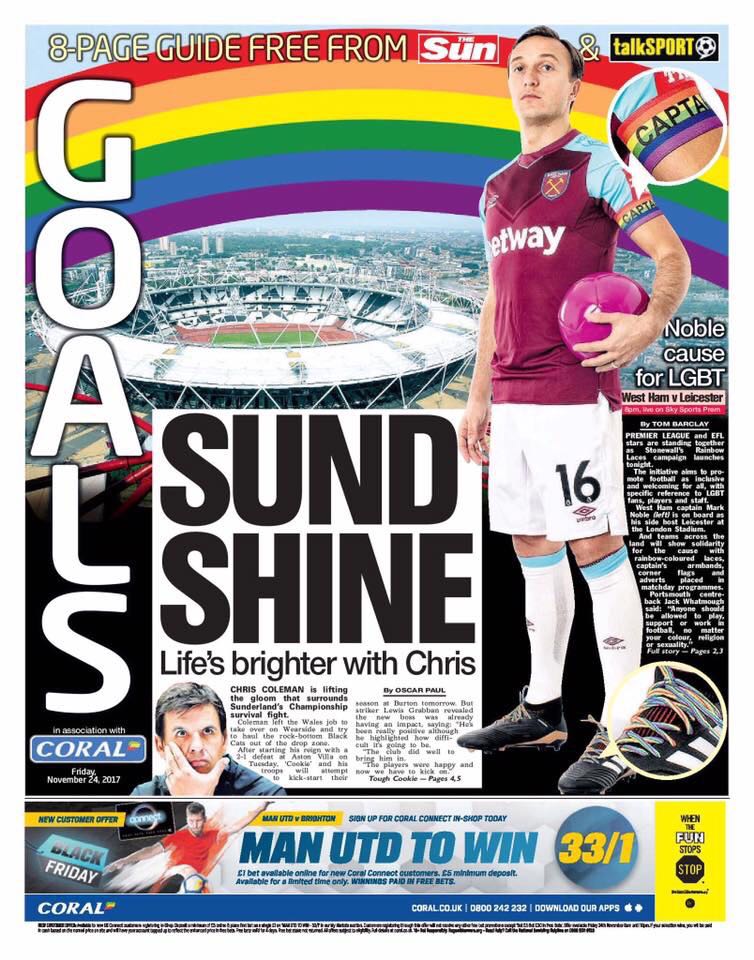 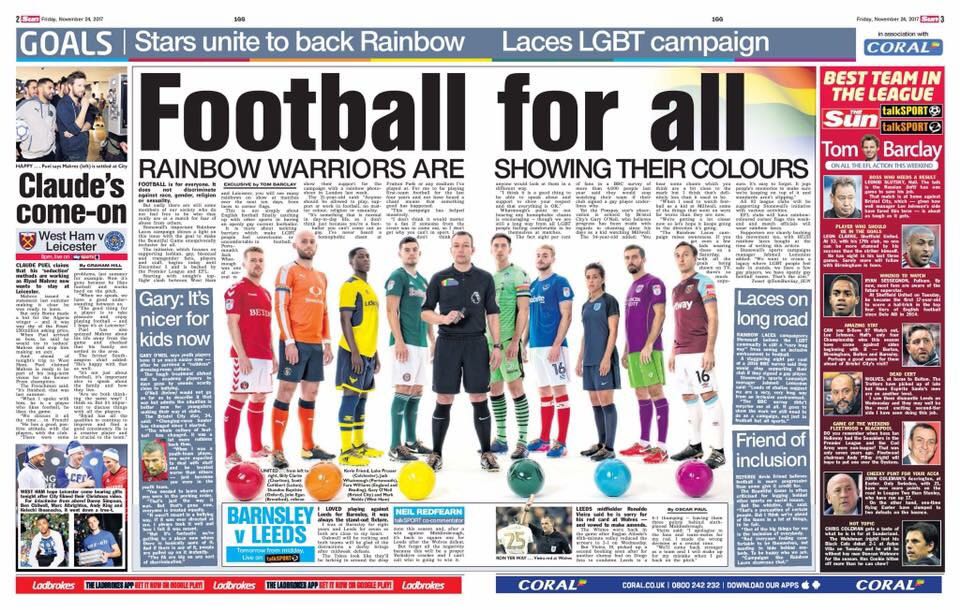 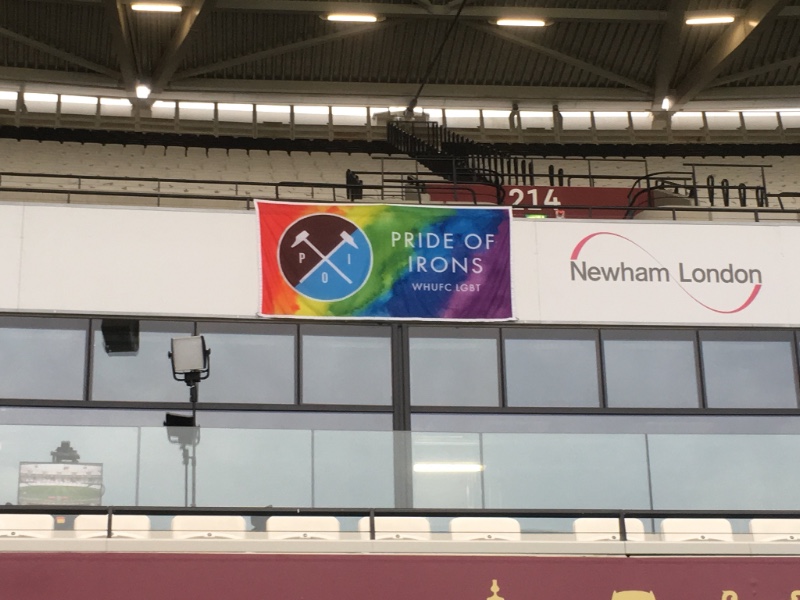 Before the Leicester game, Al went across to the London Stadium and put our brand new flag into position, and it got shown in the evening on Sky Sports.  This flag will now be at every West Ham match at the London Stadium, so look out for it while you’re there or watching on TV. The colours really stand out from all of the other flags.

Approaching the ground you would have seen this amazing sight! Yes, the club and the London Stadium worked together not just to put a huge rainbow on the giant screen wrap outside the stadium, but they also added the Pride Of Irons logo! It was a huge gesture from the club, showing their acknowledgement of our group and backing for their LGBT fans. 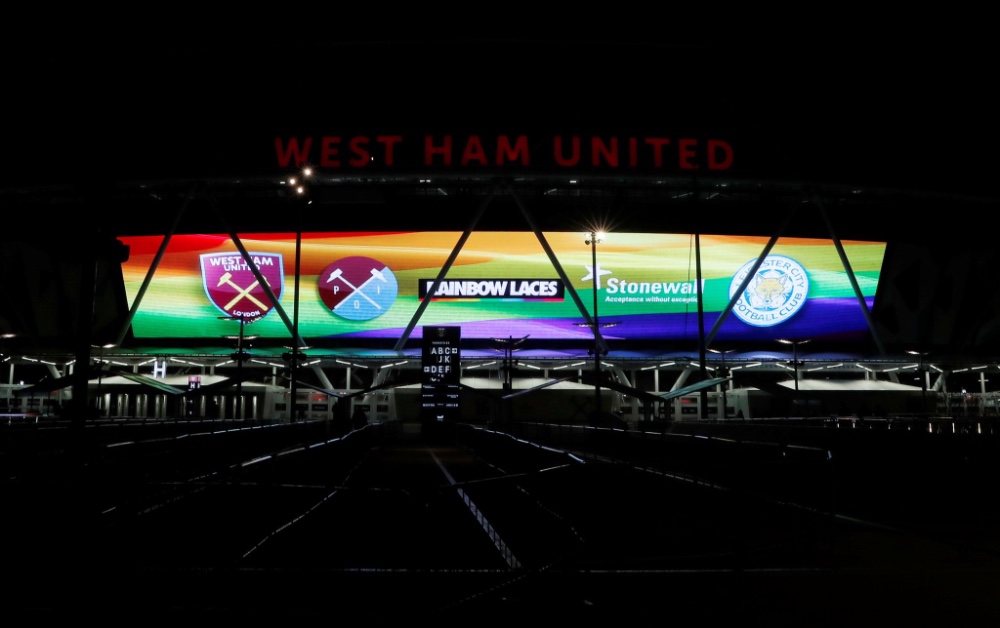 It was good to see members coming along again for a drink at the our pre-match meet up and to see a few new faces, and we also had some Rainbow Laces to hand out. We’re keen to repeat these meetups before each home match this season and it’s the only way of getting hold of one of our exclusive Pride of Irons badges. Al will be there from about 11am, ahead of the Chelsea game and there’ll be more people there afterwards. 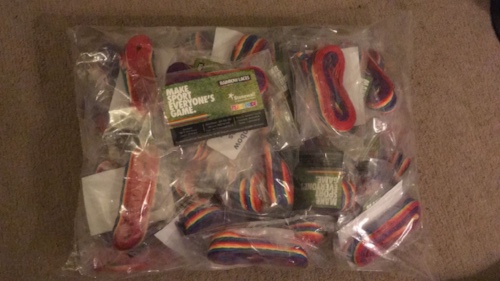 As fun as the meet up was, two of the committee had to make a swift exit to head over to the stadium for a pitch-side interview with Kelly Somers. The excitement of walking down the tunnel towards the pitch was great, but they were soon faced with the reality of their faces being on the HUGE screens inside the ground. Al did a great job of speaking about POI and Rainbow Laces week while Lorna had a fangirl moment with one of her heroes standing nearby.

To find out more about their experience, head over to our website and read Lorna’s awesome blog !

After the interview, Al and Lorna headed to their seats to read the match day programme which included a piece by Jim. Unfortunately he couldn’t be at the match (more about that later), though he did make an appearance of sorts. Unknown to POI, the club had made their own cut of Jim’s fan film and showed it on the big screens in the stadium as well as releasing it on their Twitter feed. 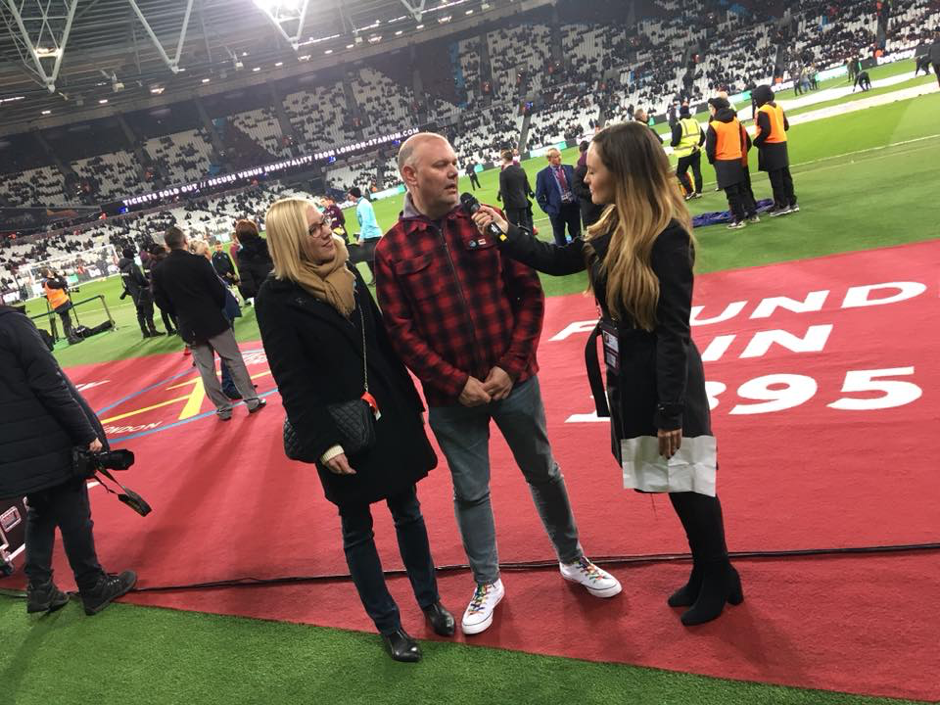 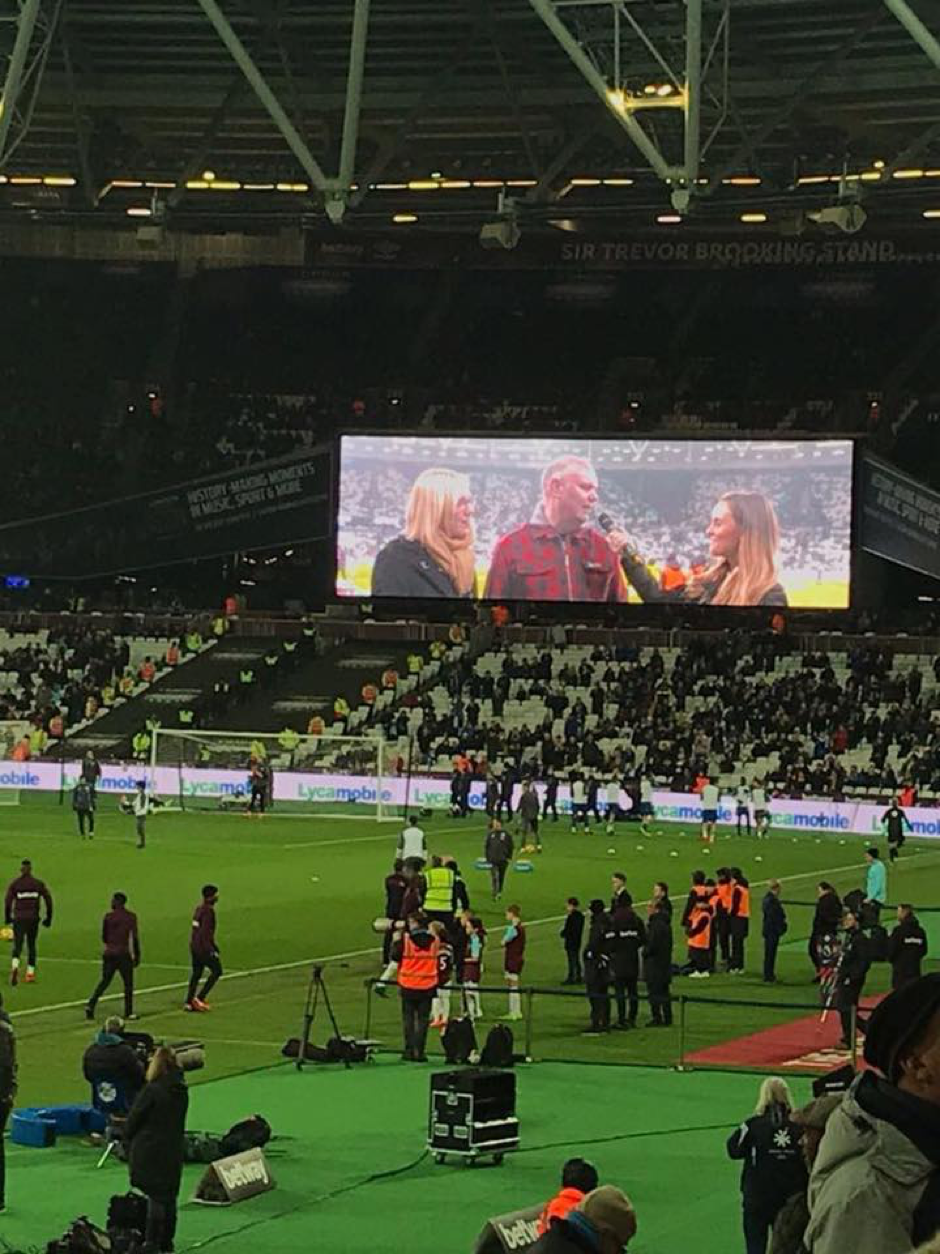 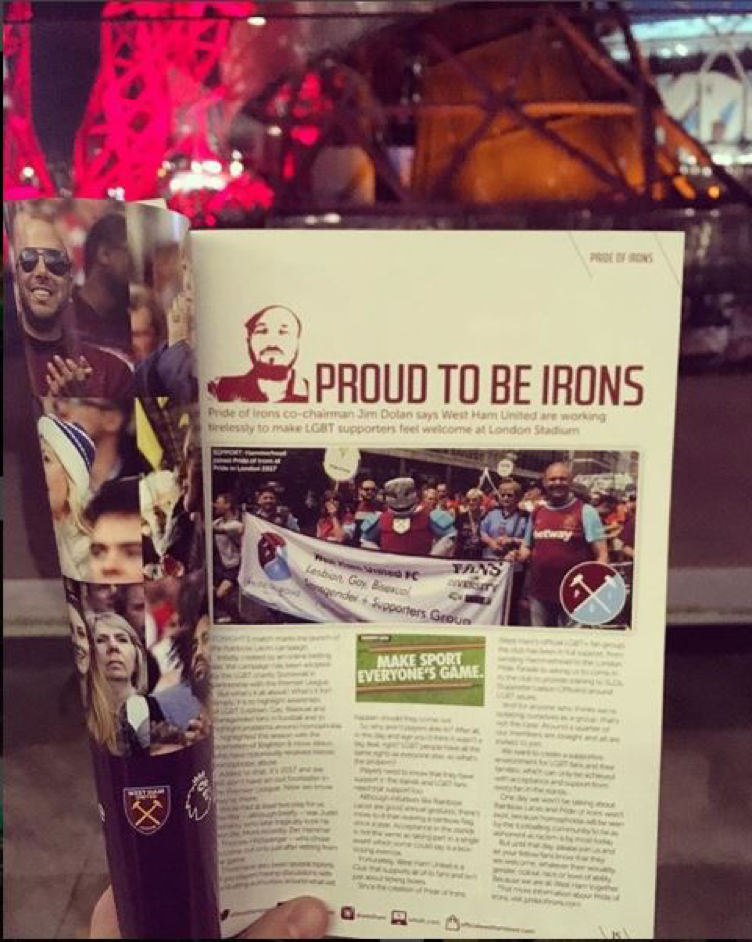 Over on Sky Sports Premier League

So the day finally came where Jim was to appear on Carling’s In Off The Bar – Sky Sports’ Friday pre-match show presented by Max Rushden. This week’s guests were Danny Mills, Muzzy Izzet and West Ham super fan; Kriss Akabusi! 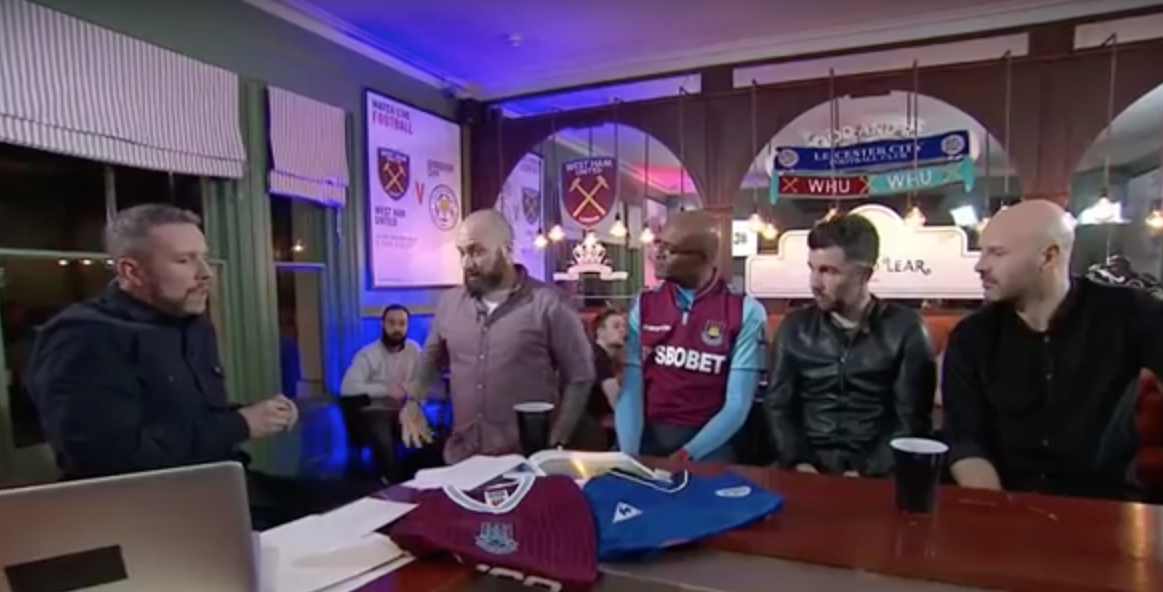 One thought on “Well what a week that was!”